ENIGMA OF THE HEN: Philosophy of Kazuya Hyoudou.

Kazuya's philosophy has been formed by his narrow worldview as well as his rather pathetic life experiences. He believes that people are selfish and will sacrifice others for their own good, and that people have an inherent sadistic nature. He sees the world and society at large as cruel, heartless, and dishonest. Dishonest until they are face to face with death, and that is where their true selves come to the surface. Their true selves, what they feel and are like deep inside, are selfish and unkind. That people will betray others to benefit themselves. That is Kazuya wholly believes. His traumas have shaped his persepctives, as he has been betrayed time and time again. In his life, as the son of a wealthy man, hes been shown superficial kindness and flattery, all to get on his good side. But he's seen people turn on him at the drop of a hat, as he lives in a material world full of ingenuity and lies.

Besides being aware of this terrible "truth", Kazuya doesn't think anything bad will happen to him. Before the ending of one poker, Kaiji touches on this in his little monologue. He comments on his privileged attitude and outlook that he is out of harm’s way due to his vast wealth. Kazuya also believes himself to be larger than life, and that arrogance ultimately leads to his downfall (no pun intended). He experiences a rude awakening when his life is threatened, and when the machine that was designed to protect him as the incarnation of his mother, fails him and betrays him. This awakening should’ve only proved his theory about human nature, but Kaiji is there to once again crush that theory into oblivion. 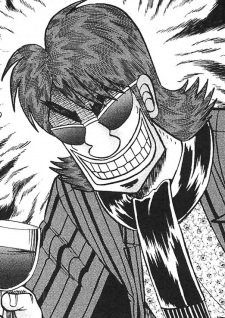 THE HEN AND THE ROOSTER: Kazuya and Kaiji.

I would one hundred percent say that Kaiji and Kazuya are meant to be narrative foils. It's a shame their rivalry and dynamic will likely never be animated into an anime! Their dialectic is one between the poor and the rich; the proletariat and the bourgeoisie; the slave and the emperor. Their relationship is a subversion of our ideas of what the working class and the ruling class are like. The typical image of the working poor is that they just aren't trying hard enough, that they need to pull themselves up by their bootstraps, and are the bottom feeders of humanity. This is in contrast with our image of the rich: that these people climbed up to the top with hard work and determination, they're talented, they're special, unique, and almost godlike.

These ideas are flipped on their head with Kazuya and Kaiji. Kaiji isn't deserving of his impoverished life, he's kind, hardworking, and selfless. Yet he is a victim of his circumstances and his gambling addiction. He works hard and yet recieves scraps in return. Kazuya, on the other hand, is selfish and a complete sadist. He doesn't give a shit about others, and enjoys poor people's suffering. He's nothing special in regards to his talents, besides his mediocre writing career. He never worked hard for anything and was born with a silver spoon in his mouth. This contrast is a grim truth of the dichotomy between the rich and the poor. That the poor are being constantly screwed over by the rich, who exploit them relentlessly and without mercy. Kazuya and Kaiji are meant to represent this as foils.

The relationship between these two is also interesting to me because of how long Kazuya existed as an antagonist -- over 3 arcs! He was an incredibly important villain, not only in the fact that Kaiji was actually sympathetic towards him, but also because of his thematic relevance. His devastating pessimism is crushed by Kaiji’s kindness time and time again. When Chang and Mario were about to be killed, Kazuya was sure that he wasn't going to pay 70 million yen to save some strangers, but he did so without hesitation. He dismisses this as him not wanting to see people die, but he was clearly in denial. He's stubborn and unwavering in his belief that humans are naturally greedy and self-centered, but Kaiji disrupts that thinking. Even as Kazuya was about to raise and put all-in during One Poker, Kaiji begged him not to, because he knew Kazuya would be killed if he did. And in the end as he's plummeting to the ground, Kaiji saves him, not to make himself look good, but because he doesn't want him to die. Kaiji's unstoppable selflessness creates a rift in his philosophy, which I think fascinates Kazuya and I both!

If Kazuya ever shows up in Part 6, I hope he reflects on One Poker. I think that kind of character study would be super interesting.